THE TOWN OF VILLAREAL, SAMAR 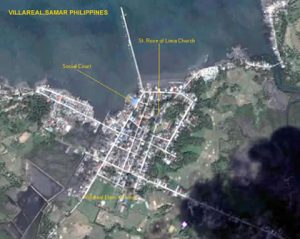 The driving distance from Tacloban City to Villareal Samar is 62 km and 58 km from Catbalogan City.

Now more than two hundred years old, Villa as the people fondly call it, has become a big flourishing town with lots of enterprising professionals. From about six hundred families in 1768, its population has grown to twenty – two thousand. Many Villahanons have travelled to distant shores in quest of a better quality of life.But nostalgic memories of home — like the celebration of the town fiesta in honor of their beloved St. Rose of Lima – always remain with them. Somehow, deep down in their hearts, a voice keeps saying: Be it ever so humble, there is no place like home.

It is classified as a fifth class municipality belonging to the second political district of Samar with 38 barangays.

Agriculture is the basic economic activity, with rice, coconut, corn and banana as their primary products. An agriculture tenant earns as much as P1,000.00 to P2,000.00 per harvest time. Average yield per hectare is from 20 to 40 sacks of rice. Planting time is June, September and December.

Majority of the farmers own their farms. Average income of P5,000.00 to P10,000 is realized every harvest time. Traditional method of farming is still practiced by most farmers. Barangay Igot is the only barangay where Operation Land Transfer (OLT) program of the CARP has been implemented.

Other sources of livelihood are office employment, merchandising and cottage or home industries such as mat weaving and firewood production. Fishing is another source of livelihood, engaged in by most residents of the coastal barangays. Sources of their capital is privately owned.

Farming and fishing are the most common livelihood activities engaged in by the both fathers and mothers in almost all barangays.

Government employment is another source of livelihood, with few people employed in most barangays. There are many people who are engaged in merchandising or buy – and – sell in the poblacion barangays. Some families are engaged in home industries or cottage industries aside from farming and fishing.